*** GET THE ENTRANCE PRESALE AT PREVENTA@NAVE.IO***

The Portuguese choreographer and performer Dinis Machado arrives at NAVE to realise two unique functions of a no-mimetic and post-somatic drag performance.

CONSUBSTANTIATION is a queer drag performance moving between the binary of gender and sexual identities. The performance develops with the creation of an “in-between” imaginary of both gender, sexuality and their materialisation: a human body getting close to the objectivisation of gender.

By adopting the objectivity as a mandala to achieve an ambiguous focus with respect to gender, the figure enters into a simultaneous and paradoxical process of auto-objectivisation and somatic disappearance, which means a cancellation of its subjectivity.

Dinis Machado investigates about a parallel gender imaginary, far from the dominant and sedimented aesthetic of pop queer.  An exercise of displacement where: glittery costumes give place to processes of hacking the body with geometrical objects of concrete materials; stylised choreographies give place to uncanny movement patterns; pop songs give place to multifarious and blurry identity narratives sang as a dodecaphonic opera, that produce more of an incomplete fiction than a narrative legitimation of the self.

This figure invests in uncanny conditionings and deformations of its body, finding in materiality, geometry, and plasticity a process of questioning the body in its self anthropomorphic representation and like that reclaiming a body of a queer materiality: that refuses to perform linear heterosexuality, maleness and anthropomorphism, and refuses paradoxically also to abandon it.

“It is as if [Machado], with his whole body, is trying to create another room, independently of the actual room we find ourselves in, here and now. A room just as imaginary as it is tangible.” [Thomas Olsson/nummer.se]

CONSUBSTANCIATION is an immersive hybrid performance where poetry reading, documental interviews, fictional self biographies, and astrological readings come strangely together to generate the embodiment of a body and an identity that interrogates itself and questions it’s paradoxical wholeness. Somehow in a strange place in between formats the performance gets together through the way these different materials construct and disfigure this body in a futuristic ritual that floats in between being ceremonial and proto shamanic

*This activity is meant for a over 16 public

Additionally, if you would you like to register to the lab “Poetic Monsters and Pedestrian Angels”, which questions the queer and the body, enter HERE 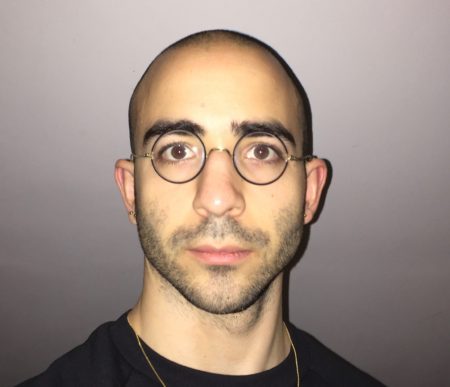